I have to admit, I have a lot of books on writing or creativity in general. They range from “Negotiating the Book Contract” to “Writing Down the Bones.” But one of the most influential books on writing/art I’ve read is Brenda Ueland’s “If You Want To Write.” I was given this book in my late teens as a gift from my aunt, who had a writer-friend that recommended it. And here I am years later, recommending it to you. 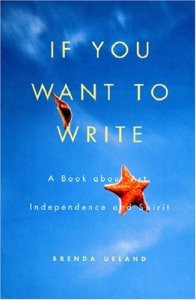 The full title of the book is “If You Want To Write – A Book about Art, Independence and Spirit” and that truly does capture the essence of this book. I love the style and language of the writing (it was originally published in 1938!) and some of the references will definitely feel dated. But the heart of her message is still very relevant – be true to yourself, no matter what. She’s ferocious about it and anything but being true to the story you want to tell is simply not fair to yourself. She will have you convinced of it by the end of the book, trust me.

Here’s an example: Let’s say you’re writing a story and you create a character that likes to eat cheese sandwiches with a thick layer of ketchup. (Ugh.) But you hesitate, because your Uncle John Doe also eats those strange cheese/ketchup sandwiches. And if you attribute this characteristic to your fictional character, maybe Uncle John Doe will read your story down the line and think that character is based off him. But it’s not. And then it will be awkward. When truly, probably somewhere in your memory, you remembered that strange little detail about cheese/ketchup sandwiches and it’s resurfaced in this fictional character that is a combination of many, many things that is not Uncle John Doe. Here’s what I’m getting at: per Brenda, you better keep that cheese and ketchup sandwich in your book. Because once you start censoring yourself, even though it’s the smallest, insignificant detail –  you are starting down a very slippery slope. Again, be true to yourself, no matter what.

Brenda was born in 1891 in Minneapolis. When she wrote this book, she was very much a part of the “Greenwich Village bohemian crowd” as her biography calls it. You can sense this in her writing – she’s bold! She’s passionate! She worked as a writer, editor and teacher and did a variety of fascinating things later in life (such as being knighted by the King of Norway) before she passed away in 1985.

I’ve found that there seems to be a mix of opinions on Brenda’s writing practices and theories outlined in “If You Want To Write” – and that’s okay. Because it’s getting a conversation going, which I can’t help but think Brenda would have loved inspiring in the first place.